And as usual, we have collected the all of the best skins into The Best of Winamp Skins 2022 (RePack 24).

Unfortunately, modern skin development has seen a significant decline in recent years. This could be due to existing coders’ lack of interest in creating skins, as well as the difficulty of learning modern skinning as a beginner.

With the popularity of new media players such as VLC, Winamp, which was a part of the MP3 revolution in the 1990s and early 2000s, began to quiet down. Winamp was a lightweight, fast player that could be completely customised. It had a straightforward interface with little playback controls that could be hidden in a screen corner or blown out to take up the entire screen, as well as advanced tools like search bars, library and artist information, and much more in multiple windows. 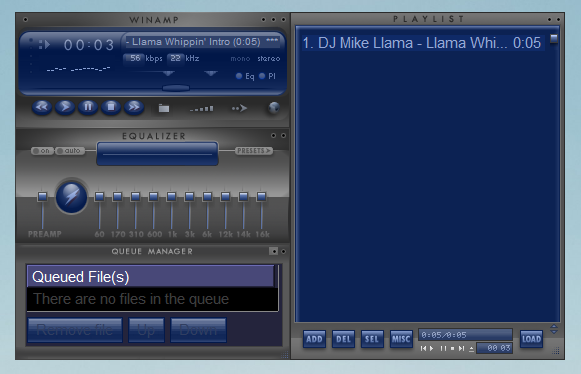 Winamp is all about individuality and customization at its core, which is why add-ons are offered to extend functionality beyond the original design. Winamp now has over 10,000 add-ons, including skins, plug-ins, visualisations, and online services, thanks to the efforts of the development community.

The programme was renamed “Winamp,” and it gained features such as a color-changing volume slider and a spectrum analyzer. Users could also use an equaliser to change frequency responses and a playlist to organise tracks. The interface, which looked like an aftermarket stereo head unit, felt period correct, but the real fun came from customising the player’s look and feel with skins and plugins.

Aside from its extensive feature set and support for high-fidelity playback, one of Winamp’s key differentiators is its skinnable interface. This level of customization allows you to reflect your own unique personality. Over 8,000 skins have been created by the Winamp community to date. Browse our gallery to find one that appeals to you, or if you’re a do-it-yourselfer, create your own.

Skins are used to change the appearance of the Winamp GUI. They also added functionality to the player by scripting. There was a whole community behind Winamp modifications, and there were many high-quality Winamp skins to choose from, though I always preferred the simple look of Winamp Classic. A plug-in extends Winamp’s functionality and allows you to add almost anything to your Winamp player, such as equalisers, additional codecs, language packs, games, and so on. You can browse the plug-in gallery or create your own, as there are over 3000 community developed plug-ins to choose from.

You can also use any of Winamp’s world-renowned visualisations to bring your music to life. They are essentially dynamic add-ons that generate images, colours, and textures that change in response to elements of the music being played. In our visualisation gallery, you can download nearly 2,800 presets. As a side note, Ryan Geiss is the creator of Milkdrop (one of the two visualisation platforms in Winamp). Ryan, who now works for Microsoft, was a key contributor to the human-tracking algorithms used in the Xbox 360’s Kinect. Explore the Winamp visualisation gallery and pick your favourite.

The museum’s integration with Webamp, Eldredge’s browser-based version of Winamp 2, is by far its most interesting feature. To load a skin from the archive, click the Webamp link at the bottom of the page. Take, for example, this.

Because the Webamp player is interactive, you can move its elements around the screen, resize them, shrink them into the compact mini player, and so on. If you really want to use it, you can also load your own music files. The interface is quite small on a 1440p monitor, so if you want the authentic experience, lower your resolution to 1024×768.

Winamp has been around for a long time. In fact, it was one of the most popular music players in the late 90s and early 2000s before iTunes and Spotify were even on the scene. While this player is no longer as popular as it once was, there is still plenty of demand for skins to customize its appearance.

If you enjoyed the early Winamp, you’ll enjoy the Winamp Skin Museum, which features a searchable and fully interactive collection of over 65,000 Winamp skins. Users can also use Webamp, a browser-based version of Winamp 2. Users can also upload audio files from their computers to this museum.

And as usual, we have collected the all of the best skins into The Best of Winamp Skins 2021 (RePack 23). Open the best skins instantly! Or, you could search through our web site and choose for yourself! The archive contains more than 73000 skins.

So what has happened on the skins front in the current year?

The first thing that came into my mind was the Skinning Framework Classic Pro. Classic Pro gives you the power to create single window skins just the same way as Winamp Classic Skins. Till now the Classic Pro Framework has been downloaded over one million times from different download mirrors what is a huge success. But this would only have been possible with lots of people creating cool skins for it!

Thus, let’s start with my top 3 Winamp Skins.
First there is “cPro Insomnis”. It has a dark and stylish user interface and is now offered with a bunch of cool color themes.
Then we have “cPro Relax”, a colored and nice styled skin which was the clear winner of the “Skinning Shootout” held by Skin Consortium.
Another highlight was the recall of “cPro MMD” – the official Classic Pro port of the legendary MMD3 skin by Sven Kistner.

But also the Classic Skin developers have done some great work in the past!
My absolute favourite is “MMVIII” by GaretJax and mike_db – a great level of detail and nice colors, so go and check it out!
As a counterpart to this skin David Wood has created a cool vista styled skin called “Glitch Alienmorph Black” with a modern and clean userinterface.
Last but not least we also have a future styled skin by SMAR Designs: “Acierate” is green and sharp, so don’t cut yourself on it!

Unfortunately Modern Skin development has suffered from a big decline in the past few years. This might be due to the lack of interest of existing coders in creating skins and the hard way to learn modern skinning if you are a beginner. Nevertheless there have also been some highlights in this category:
Taking the download count “Azenis mimi” by itemsoft is the clear winner. A simple and clean interface based on the well-known Azenis theme.
For all Winamp classic fans Corwin has created a revamped and feature picked skin called “NEO CLASSIC”.
And we have another winner in this category as well: “krazyPlayer” by Skin Consortium has won the “Winamp Freestyle Skinning Contest” over at deviantArt. This future styled skin has a nice RGB color picker as well as a stunning breathing beat animation.

So this was my fast run through the current year! Of course there are plenty of other cool skins to talk about, so I encourage you to comment and let us know your favorites as well.

Skins are one of Winamp’s most popular features. What are skins? Skins are themes or a set of images that allow an artist to customize their Winamp to be whatever their heart desires! We’ve compiled the all of the best skins into The Best of Winamp Skins 2020 (RePack 22). Download and install and have the best skins instantly! Or, search through our Skins Pages and choose for yourself! Come back often as an average of 10 skins are added every day!

A lot of people get really excited when they find out that they can change the look of Winamp through skinning. The problem is they get turned off once they hit a roadblock, be it what to do next, hit a problem submitting to MyWinamp.com, or indeed, just figuring out how to get started. So here we have a set of simple steps that holds your hand from initial idea to finished masterpiece. Good luck!

Need help, do ya? You do have the option to take the Winamp Walkthrough which shows you the most popular features as well as basic functionality of the player. You will learn how to load music into your player, set up your Web Browser to automatically connect and play SHOUTcast radio stations. Once you have mastered such features as those, you are ready to build your collection of music and play with the most popular player on the Internet today!